WASHINGTON (Office of Senator Roger Wicker)  – U.S. Senator Roger Wicker, R-Miss., and Cindy Hyde-Smith, R-Miss., today announced the award of a $261.7 million contract to Taylor Defense Products in Louisville to provide cranes for the U.S. Army. Taylor Defense won the competitive $261,753,327 firm fixed-price contract to produce commercial cranes with minor military modifications. The contract work is expected to extend through Nov. 18, 2024. “Taylor Defense continues to deliver some of the best heavy-duty equipment in the world to our troops,”  Wicker  said. “It is encouraging to see the Army recognize Taylor Defense with this contract award, which will support the hardworking employees that build these platforms here in Mississippi.” “This contract is a huge vote of confidence in Taylor Defense and its employees to give the Army the equipment it needs to succeed logistically,”  Hyde-Smith  said. “I commend Taylor on its successful bid, which will benefit our national defense and our
Post a Comment
Read more

Made in Mississippi: 2022 Nissan Frontier 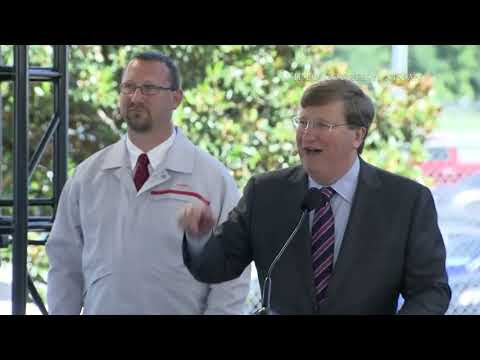 This summer, the  Nissan Motor Corporation 's Canton plant began exclusive production of the 2022 Frontier. In our latest Made in Mississippi video, Nissan Canton VP of Manufacturing Tim Fallon shares what it means to have this plant building the company's redesigned pickup. https://bit.ly/3FxTDMC
Post a Comment
Read more

Kirk Lewis just wanted a haircut. The year is 2012, and Lewis was recently named the Deputy Mayor of Detroit because his good friend and Mayor, Dave Bing, was on leave due to a medical procedure. On this particular day, Lewis took the elevator down to a barbershop in the basement of the mayor’s office. “Oh man, the security went nuts,” Lewis said. “You would have thought that I had been kidnapped. They stormed down there once they found out where I was at. That was kind of my realization that this is different.” It was a different role than his full-time gig working with Dave Bing, and that role as chief governmental and corporate affairs officer is something he never envisioned having, either. These roles he had with his long-time friend are also symbolic of the relationship Bing and Lewis share, and it’s a relationship not everyone gets to develop. “I got to be friends with Kirk’s father and mother because they were big Pistons fans,” Bing said. “They were two of the big fans who s
Post a Comment
Read more

Today's Member Appreciation Month post celebrates 10 years of membership by Taylor Power Systems . Taylor Power Systems is one of Mississippi's strongest brands and their products continue to provide standby power for customers across the country.
Post a Comment
Read more

Today's Member Appreciation Month post celebrates 10 years of membership by Hargrove Engineers + Constructors . We appreciate your membership and the expertise you provide manufacturers to build, maintain, and run their facilities!
Post a Comment
Read more

OSHA -    On November 12, 2021, the U.S. Court of Appeals for the Fifth Circuit granted a motion to stay OSHA's COVID-19 Vaccination and Testing Emergency Temporary Standard, published on November 5, 2021 (86 Fed. Reg. 61402) ("ETS"). The court ordered that OSHA "take no steps to implement or enforce" the ETS "until further court order." While OSHA remains confident in its authority to protect workers in emergencies, OSHA has suspended activities related to the implementation and enforcement of the ETS pending future developments in the litigation.
Post a Comment
Read more

Today's Member Appreciation Month post celebrates 20 years of membership by Balch & Bingham . We appreciate your commitment to our association and your passion for representing manufacturers in Mississippi.
Post a Comment
Read more
More posts